To get through life we have people that we look up to, for guidance, for motivation, for answers or even for a different perspective. We find similarities that connect our lives to theirs and aspire to follow in their footsteps. These people influence our life in an immeasurable way. Whether they are your known or unknown role models, they have an impact. So, who are your role models?

My role model is a man who is renowned for his theories in astrophysics. He studied at the University of Oxford and went on to further study at the University of Cambridge. His work is impressive but, what amazes me is not his theories, more so, the way he lived his life. At the age of 21, whilst studying at Oxford, he was diagnosed with a life-changing condition, Amyotrophic lateral sclerosis (ALS). It is a progressive neurodegenerative disease that disrupts the nerve cells in the brain and spinal cord, leading to the loss of muscle control and movement. This resulted in him being wheelchair-bound for most of his life, and his normal communication was restricted. However, with the help of software created by Intel, he was able to communicate. This technology worked by detecting the twitches of his cheek. How fascinating, right?! Once the sentence was formulated, a speech synthesiser would read it out aloud. Doctors told him that he would only live for two years after this diagnosis, but as a shock to all, he lived until age 76. Within the 76 glorious years of his life, he got married twice and had three lovely children. Any guesses as to who this could be?

There are many people in my life that I look up to daily, but here I am talking about the one and only, Stephen Hawking. The way he went about living his life truly inspires me, reminding me to never give up. His witty comments and sarcasm was also something I admire; living life with such enthusiasm. He was even a special guest character on The Simpsons show. His life story was featured in an Oscar-nominated film, The Theory Of Everything, which captured various elements of his life. Stephen Hawking’s story gives me the inspirational boost that keeps me going. I can relate to many of his difficulties with having a rare life-changing condition, and to know that he dealt with it a certain way, encourages me to also live life with a similar buzz. Like any other person, he faced countless hardships but, he has left the world with many wise words that motivate us.

“One, remember to look up at the stars and not down at your feet. Two, never give up work. Work gives you meaning and purpose and life is empty without it. Three, if you are lucky enough to find love, remember it is there and don’t throw it away” ~ Stephen Hawking

It is always good to recognise and appreciate the role models in our lives. Take some time to reflect. Why are they important to us and how have they impacted who we are today? 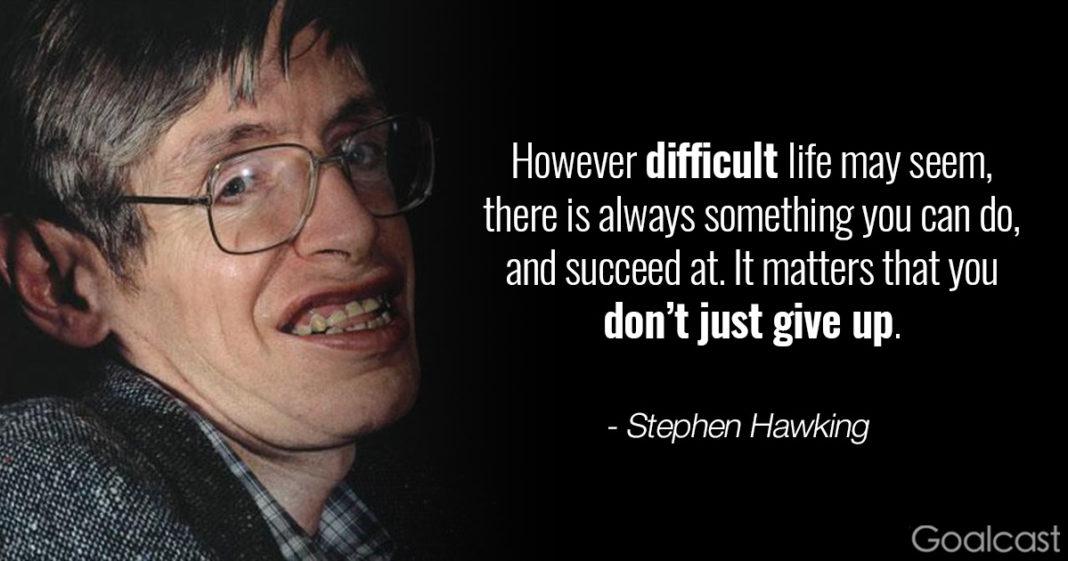 One thought on “Look up at the Stars”